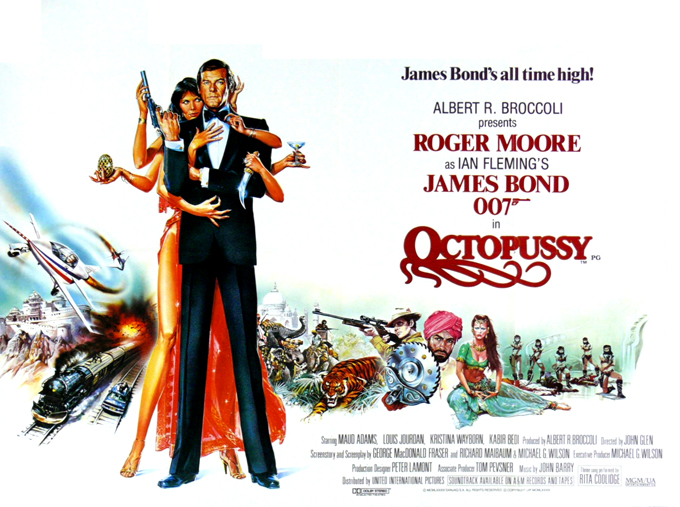 PLEASE NOTE: THE FOLLOWING REVIEW IS A COMPLETE, SPOILER-FILLED REVIEW OF THE FILM (hey, it came out in the 80’s, whaddaya mean you were watching ‘Wargames’?)

Bond shows a fine line in tailoring. From English gent…

…to Cuban Colonel Luis Toro, via reversibles. I had a reversible jacket once. I only ever wore it one way round though. There’s a lesson.

James plants a bomb in an aircraft hanger, but is quickly discovered by the real Col. Toro.

I’m not quite sure why, but the guards are wearing ‘chutes, which 007 pulls. Would they really fly up into the air like that, with hardly any momentum? Oh dear, I’m off thinking physics at the start of a Bond film. Just ignore me. – See more at:

One compact fighter plane (Acrostar Jet) secreted away within the horse box, and Bond is off, leading a heat-seeking missile back into the military shed.

007 flies through the shed and out the closing doors in impressive style.

John Barry is back! JB and JB together again. At least ‘Octopussy’ will have a decent soundtrack, if nothing else. No more of that funky disco crap.

This clown is on the run from the circus, or more specifically, a couple of knife-wielding goons.

Despite being stabbed in the back, ‘clown’ manages to crash into the Residence of the British Ambassador.

The Ambassador picks up the shiny egg that rolls out of ‘dead clown’s hand.

Moneypenny (Lois Maxwell) has a new assistant at ‘Universal Exports’.

A meeting with Fredddie and the new ‘M’ (Robert Brown) results in discovering the Fabergé egg the clown was carrying was a fake, with the real thing being auctioned at Sothebys.

Turns out 009 was the clown, collapsing in the East German Residence.

Ah, this chap’s new. General Orlov (Steven Berkoff). He’s soon off to the Kremlin Art Depository. Something to do with eggs, perhaps?

The Fabergé egg is the property of a ‘lady’. Bond decides to outbid the lady.

Following outside, the lady and her man get into a Rolls, driven by a nicely-Turbaned driver. Does this indicate a future Asian destination?

Bond tells Freddie he switched eggs during the auction. The buyer flew to Delhi, which is where Bond flies too. Not before signing a chit of the egg – government property now!

The Taj Mahal. Just in case you were in any doubt we’re in Delhi.

The Monsoon Palace is where Kamal Khan lives, the object of Bond’s search. Fortunately, he plays backgammon at the hotel casino, where Bond is staying.

A boat docks and the mystery ‘lady’ gets off, and this is the first time we get a look at the Octopussy logo on the ship’s flag.

Ah, so this is Kamal (Louis Jourdan).

While the cheating Kamal takes more British dosh off a dozey Major, Bond chats up his bird.

Then Bond pinches his loaded dice, and makes the cheating sod sign a big check.

Like those ones bank’s give you for really expensive things like mortgages (and boats probably, in 007’s case)

This guy has killers eyes! Not only can he squeeze dice into dust, he also has a shotgun trained on 007.

Vijay knows a trick or two though.

One street chase later, and old ‘Evil Eyes’ (actually called Gobinda) still has his big shotgun at the ready.

Smithers (Jeremy Bulloch) is back.

Obviously they completely dropped the gadgets from the last movie, so they’re back. Back! Acid in the pen.

Hearing device in the pen, for the microphone ‘Q’ has placed in the Fabergé egg.

And a Liquid Crystal Display (we call that LCD these days) in a Seiko watch. 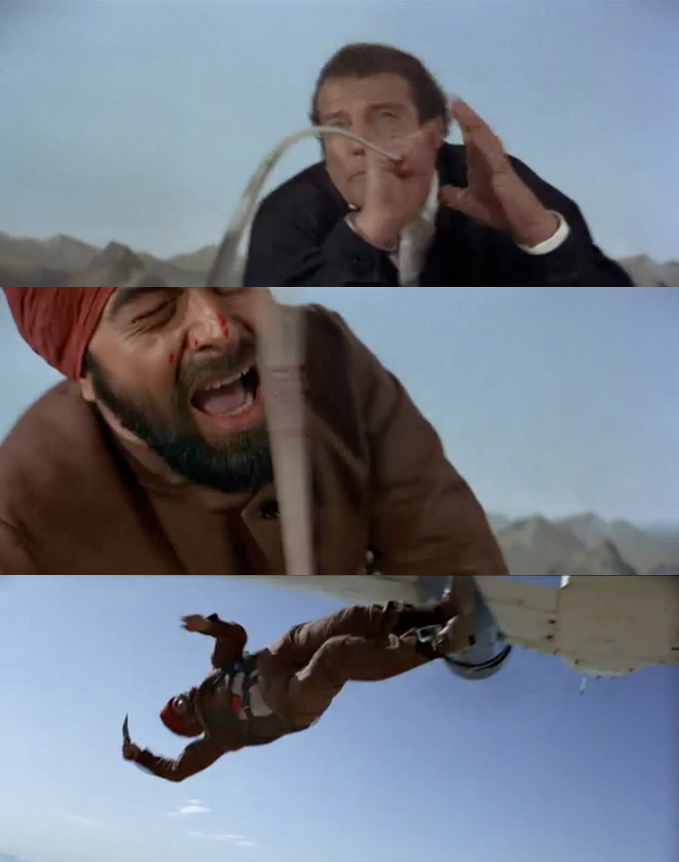 Slightly spoilt by the way Bond flicks the aerial into Evil Eyes face, which hurts a bit more than you might expect, especially when you really don’t want to let go of a plane!

Like a classic Hitchcock movie, Bond and Octopussy are left hanging over a cliff as the plane explodes into smithereens.

Gogol denies the incident ever occured.

James is getting extra medical attention.

FINAL LINE
JAMES! (not the most imaginative)

Well, that was better than ‘For Your Eyes Only’, but most Bond films are.

At least the ‘All Time High’ theme plays often throughout the film. I don’t think John Barry put much effort into the soundtrack otherwise, but even so, at least it sounds like a Bond film rather than a 70’s nightclub.

Something that annoyed me, amongst the general sexism all over the place, was the way the Bond producers (in 1983, hardly the 50’s) feel it’s okay for a hotel maid to offer herself up in any way imaginable to Bond, just because he’s a man of some importance and she’s a hotel worker who will drop her drawers if someone staying wants it. Is Dominique Strauss-Kahn a fan of this film? Might explain a few things.

It’s amazing to discover that the producers were basically looking to replace Moore after four movies, with people like James Brolin, Timothy Dalton (he-llo), and Ian Ogilvy constantly sought for the role. I’m not quite sure how he must have felt about feeling surplus-to-requirements for so many years. Perhaps that’s why he never seems bothered if the film’s a bit shit. He turns up, does the job, and gets a bigger salary next time.

Considering most of the film takes place in India, I can’t recall much in the way of racism, which is something I guess.

And so the end is near, my friend. Just two more hours, two very long hours, left to endure. Then the Moore days are over. It can’t come soon enough…

Next Post Benedict Cumberbatch is in Star Wars VII